New research has revealed the areas throughout Australia that are experiencing the highest levels of mortgage delinquency. It begs the question: could you (and should you) profit from suburbs struggling with high mortgage stress? Sarah Megginson reports

If a vendor is experiencing difficulty paying their mortgage for one reason or another (unemployment, underemployment, illness, divorce; the list goes on), there's a better than even chance that they'll accept a low-ball price simply they can wak away from the stress.

This type of scenario could create an opportunity for shrewd investors to bag an under-market property deal, and new research from Fith Ratings could facilitate these transactions in greater numbers.

The report reveals the areas throughout Australia that are experiencing the highest concentrations of mortgage delinquency, with seven of the top 10 worst areas located in Victoria.

"I'm not one for making money from others' misfortune, but the reality is that often someone who is in trouble needs assistance, and finding a person to purchase their property - albeit at a reduced price - could free them from the worry of having their home repossesed," says Jane Slack-Smith, director of Investors Choice Mortgages and founder of Your Property Success online education.

"In fact, it could just create a win-win for all involved." 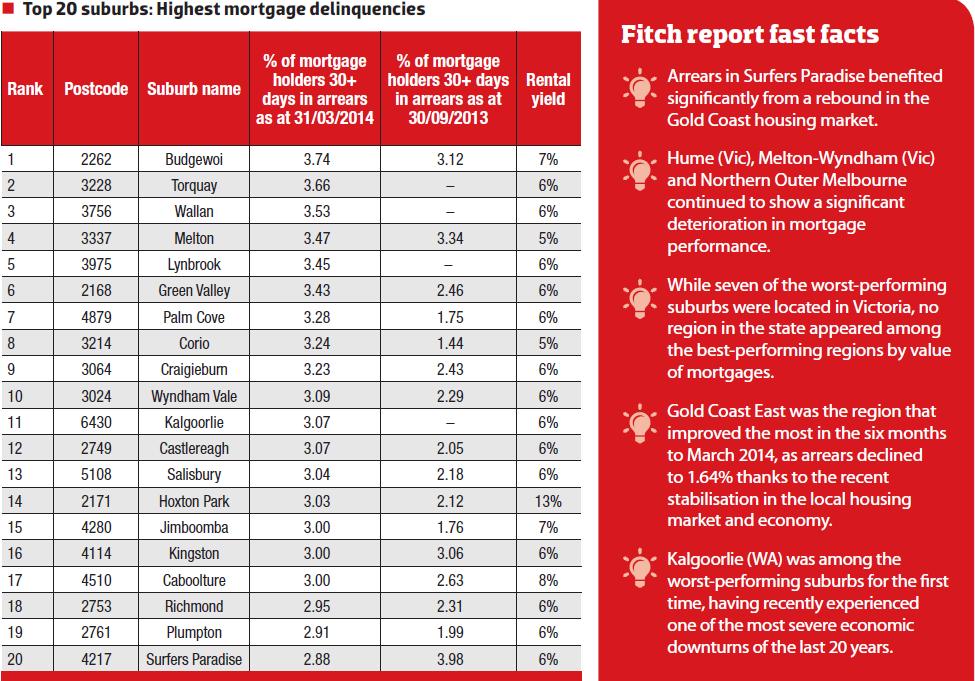 Budgewoi in NSW replaces Surfers Paradise on the Gold Coast as the worst-performing postcode by value of mortgages in arrears as of 31 March 2014, according to the report.

“Surfers Paradise and Palm Cove in Queensland were the only popular tourism destinations among the worst-performing postcodes. Tourism had been a hallmark of the worst-performing locations between 2008 and 2013; however, these areas have generally improved as the property market has recovered.”

Budgewoi may be in first place this year, but it has  languished among the worst-performing postcodes over the past five years, appearing in nine of the 10 surveys up to  March this year.

This indicates that homeowners in the suburbs featured in this report may have struggled for some time and could continue to do so in the future, warns Slack-Smith.

She suggests that property buyers who are considering investing in any of these suburbs should do extensive research in order to make sure the location and investment opportunities stack up on multiple levels.

“Investing in areas of high mortgagee delinquency does not fit into the low-risk property investing strategies I advocate, which is to buy below the market; add equity by creating value through renovating or developing; and buy in a predicted growth area to begin with,” she says.

“This way, you have three ways of making money with your investments, so if you get one wrong you still have others to fall back on. Arguably, you may be able to fit an area from the Fitch report into the first two strategies; however, I strongly suggest that the areas that are facing mortgage stress are areas that have a very long road to recovery, in terms of reflecting  strong future capital growth.”

Property expert Michael Yardney, director of Metropole Property Strategists, makes another interesting point, noting that interest rates are currently the lowest they’ve been in a number of years, and property values are increasing in every state.

“It’s fascinating to me that mortgage arrears are rising in this market; it’s actually the opposite of what you’d expect,” Yardney says.

“Look at Victoria, for instance; according to the Fitch report, Hume was the worst-performing region in Australia, with a delinquency rate of 2.93%. When you consider that Victoria as a whole experienced capital growth of 10% plus in the last 12 months, it makes me wonder why are people running into mortgage arrears?”

The answer is complex. It could be related to the fact that some homebuyers grew overconfident and borrowed heavily, ending up with a level of debt that was more than they could handle.

“Some people transition from renting to home ownership without recognising that when they buy a house there are lots of extra costs and outgoings, like maintenance and council rates,” Yardney says.

“They also buy a new TV and fridge and furniture and they kit their new home out, which comes at a cost.”

Regardless of why delinquency rates are rising, Yardney believes investors need to do more research before blindly diving into these areas to chase under-market deals.

“Rising delinquency rates don’t necessarily mean there are more mortgagee auctions or sales; I certainly don’t see a high level of desperate sales in the current market,” he says.

“That said, looking ahead in the next year or two, it’s very likely that interest rates are going to rise, and in those areas where people are currently having trouble paying their mortgage already, that’s only going to add more pressure.”

At the same time, these are also the areas where unemployment may rise, as the nature of employment in Australia is changing, Yardney adds.

“We’ve got less manufacturing and more service industries, such as health, retail and IT, and the people employed in these industries generally live closer to the city. So it’s potentially going to be a double whammy for those working-class, outer-suburb areas that may suffer more next year and the year after,” he says.

“There could be cheap properties to buy, but that doesn’t make them good investments, especially if those areas have generally underperformed in the past, as they will continue to underperform in the future.”

Slack-Smith agrees, isolating some commonalities between the suburbs featured in the Fitch report.

"The obvious benefits of buying one of these properties  is that you are buying a cheap property, but the assumption here is that cheap means it is undervalued. In many of the postcodes listed in the report, it is obvious that the following things are in common:

“All of these criteria should warn you that ‘cheap’ is not value, and potentially they do not have the opportunity to grow in value, at least in the short term.”

It’s important to consider insurance when weighing up your property investment options. “In areas where you‘ve got those types of trends in mortgage arrears developing, the rental arrears could flow into that pattern as well,” says Carolyn Majda, executive manager at Terri Scheer Insurance. “One of the things we advocate is to have a property manager; it’s even more important in these types of areas, where you need to keep on top of your arrears.”

Regardless of how much of a bargain a particular property represents, John Kovacs, director of NMD Data, says investors should avoid properties with the following attributes:

Mortgagee sales: the risks and rewards

If you’re an investor or developer, mortgagee repossessions may allow you to purchase property for less than the expected market value, says John Kovacs, managing director of NMD Data, which exclusively lists deceased estate, mortgagee foreclosure and housing authority properties.

“The more [repossessions] there are in a given suburb, the better your purchase price could be,” he explains.

“The majority of mortgagee auctions and sales are found in the outer suburbs of each capital city, commonly referred to as the ‘mortgage belt’.”

The benefits of these types of investments are, first and foremost, the lower price points.

“Properties can be bought well below market value, with a 10 to 15% discount achievable. This provides a more affordable option to enter the property market,” he explains.

“They may require only minor renovations, such as painting, new carpets and landscaping, to get them up to scratch, and they often provide a higher rental yield, due to lower purchase price. All of this can give you leverage for future investments.”

Of course, these types of investments are not without their risks. “These include paying more than the property is worth, overcapitalising on renovations, and locking yourself into a slow-moving capital growth area,” Kovacs says.

You also face the risk that distressed neighbours could sell their properties for bargain basement prices – a move that could impact on the value of your property.

“A valuer will need three comparable sales to estimate the value of your property,and if there are three fire sales in your suburb, then that could set the price for your property,” cautions Slack-Smith.

“Ultimately, unless you have at least two ways to make money out of your property – and unless you are using a flipping renovation strategy, one of these has to be capital growth – you should proceed with caution, as your cheap property might just become your most costly mistake.” 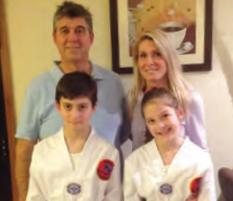 Les Fazekas had bought and sold a number of properties before he stumbled on his formula for real estate success: buying undervalued homes + renovating to add value = big property profits.

His first investment was a regular residential deal.

Together with his joint venture partner, his brother Michael, he invested in a house and land package in Queensland in the early 2000s.

“We did quite well out of it after holding it for six years. My brother got a new four-wheel drive and I was able to buy a one-year-old Toyota Camry as well as knocking off a bit of credit card debt and put some cash in the bank,” Les says.

Buoyed by their success, Les began researching his local area in Keilor Downs, Victoria, looking for good-value deals. That’s when he stumbled across the NMD Data website.

“I don’t like profiting from someone else’s misfortune, but the reality is that in those instances someone is going to buy the property,” Les says.

“People get married and they don’t plan to get divorced, but sometimes the fairytale turns into tears. It’s just a fact of life and astute investors will get on board.”

This is precisely what Les has done. By watching the market closely and harnessing the resources of NMD Data, Les has been able to secure a number of deals at well under market value.

What’s more, he’s turned it into a family aff air. Together with his brother, his wife Nicky and his two kids, Ben and Vivienne, Les has bought, renovated and sold several properties, enjoying a healthy five- to six- figure profit each time.

There are huge profits to be unlocked when buying unde-market deals, but Les warns that you must be prepared to roll up your sleeves. Homes that are sold as mortgagee sale or deceased estate have often been neglected, so they're generally in need of a little TLC.

"You can turn up to some of these homes and find that half the property is empty. At a mortgagee repossession sale, you can find that fixtures and fittings are missing: I'm talking heaters, the stove, the hot water, everything. I once saw a house where the built-in wardrobes had all been ripped out," Les says.

"It scares a lot of people off, as they think it's too much of a mess to deal with. But those things are easily replaceable, and, with a bit of vision and some elbow grease, you can turn an ugly duckling into a swan."

This feature is from the October issue of Your Investment Property Magazine. Download the issue to read more!