Despite the growing concerns about the COVID-19 outbreak, auction volume remained steady over the weekend, with volume and clearance rates remaining elevated, according to the latest figures from CoreLogic.

There were 2,220 auctions recorded across capital cities over the weekend, returning a preliminary success rate of 70.6%. This came after the auction market took a hit in the previous week due to the partial holiday.

The recent figures also represent a significant growth from the auction numbers reported over the same time last year.

"After the remaining results are collected, it is likely that the final auction clearance rate will revise below 70% for the second week in a row," said CoreLogic analyst Caitlin Fono.

While clearance rates have edged lower, the final success rates across major centres are likely to remain around the high of 60% to low 70% range. Fono said this indicates that housing remains a sellers' market.

"With uncertainty rising and confidence slipping as the coronavirus outbreak becomes more widespread, there is some downside risk that housing activity will reduce which could weigh on auction markets over coming weeks," she said.

However, based on the early auction results, the housing market has proven to be relatively resilient so far, Fono said.

Melbourne was the busiest city, with 1,173 auctions. In terms of clearance rates, Sydney remained superior with 74.6%.

The table below shows the performance of each capital city: 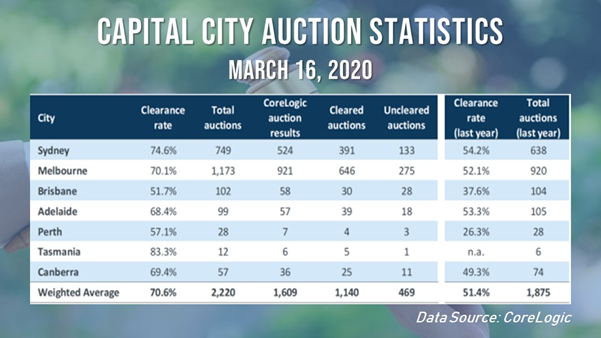