The residential auction market has been undergoing a transformation in response to the challenges of the pandemic, with trends like bidding online and through cryptocurrency beginning to surface.

Apollo Auctions director Justin Nickerson said the pandemic has forced the industry to rapidly shift away from the traditional way of auction campaigns.

"Before the pandemic, it’s not like online or in-room auctions were not available to agents and vendors, but most of the time traditional on-site auctions were the most popular," he said.

"However, when big chunks of the population are locked down but were still keen to buy and sell real estate, the auction sector had to evolve to ensure that we were providing them the opportunity to do so.”

This was reflected in the strong take-up in auctions, with clearance rates remaining in the 70% to 80% range throughout the lockdowns in some of markets in Sydney and Melbourne.

Mr Nickerson said it is unlikely for auctions to remain predominantly onsite once all pandemic-related restrictions end.

"In areas that weren’t locked down often, we have been running what I would call ‘hybrid auctions’ that provide the opportunity for buyers to interact in whichever way suits them the best," he said.

"What I mean is that some bidders might be attending the in-room auction, others may be bidding via telephone, and some may decide to lodge their bids online while watching the live stream of the auction – this level of choice was never the norm before, but I believe it will be from now on."

Mr Nickerson said many sellers and agents will likely take advantage of in-room auctions in the future.

"One of the main things I believe they have learned is that in-rooms remove the chances of being rained on or being drowned out by traffic noise or the party raging next door, while still securing an excellent result in a more controlled environment,” he said.

"Come auction day at the end of this month it will be LIVE streamed on our website and Facebook page for viewers to watch around the country," he told Your Investment Property.

"People can bid with cryptocurrency or with Australian dollars and exchange rates will be converted at the time the bid is placed."

The residential property (pictured) being auctioned sits on a 620sqm-land located at 51 Monaco St, Broadbeach. At the time of writing, the online auction has been closed. It will be opened again by the end of the month. 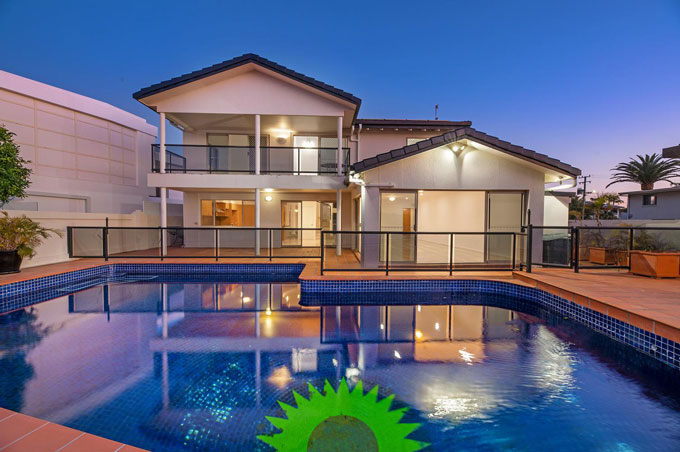 Mr Hames said the use of cryptocurrency as a payment method is becoming more commonly used for purchases as confidence surrounding the technology gets stronger.

"Cryptocurrency is relatively new here in Australia however the response we've had over the last few months suggest that Australians are adopting this new technology," he said.

"This opens up our platform to a whole new audience who otherwise might not have been interested in purchasing property."

Lloyds Auctions is one of the few groups who adopted cryptocurrency as a form of payment.

"Ever since, we have found a huge demand in cryptocurrency attracting bidders from investors and high net worth individuals through to mums and dads bidding on your everyday consumer goods," he said.

During the period, combined capital cities registered a 71.7% clearance rate, slightly down from the 75.7% in June but a strong improvement from the same period last year when 59.2% was recorded.

The quarter covers the period when Sydney, Melbourne, and Canberra entered their respective extended lockdowns.

The lockdowns resulted in an 18.3% withdrawal rate across Australia, higher than the 7.3% during the previous quarter.

Bearing the brunt was Melbourne, which reported a quarterly clearance rate of 62.8%. The city hit a peak withdrawal rate of 61.6% in the week ending 29 August.

Sydney, on the other hand, held reasonably firm during the quarter, with its clearance rate sitting at 78.6%.

"The difference between Sydney and Melbourne clearance rates through the September quarter highlights the importance both buyers and sellers put on the ability to physically inspect a property," Mr Lawless said.

When physical inspections were reinstated for Melbourne, the average final clearance rate has bounced back over 80%.

Auctions becoming popular in other cities

Another interesting trend during the September quarter was the increasing popularity of auctions as a way so sell a home.

CoreLogic head of research Eliza Owen said this was apparent in Brisbane and Adelaide, which both recorded consistent growth in housing values over the September quarter.

"Not only have volumes been higher across Brisbane and Adelaide, but clearance rates have been well above historic averages through the September quarter, which may cement auctions as a more popular sales method across these cities through future housing market upswings," she said.

Both Adelaide and Brisbane hosted auctions that were significantly above their decade averages.

Over the week ending 17 October, capital-city auctions reported their fourth busiest week so far this year, as 2,920 homes went under the hammer. Of the total auctions, 81.8% pushed through a sale.

Melbourne led the pack in terms of activity after it hosted 1,478 auctions over the weekend.

On the other hand, Canberra reported the highest clearance rate at 90.7%, albeit only for a smaller number of auctions at 123.