The increase in listings in July seem to indicate an uptick in the interest of property owners to sell their homes, an expert says.

National listings increased by 3.8% in July, with all capital cities, save for Darwin, reporting gains in the number of homes up for sale, according to the latest figures from SQM Research.

Among all capital cities, Sydney registered the highest growth at 8.7%, followed by Canberra's 6.4%, and Melbourne and Brisbane's 5.9%.

On an annual basis, listings surged in Melbourne, which reported a 20.7% increase. Sydney also posted substantial annual growth in listings at 10.7%.

"Normally, falls are recorded. This could have been generated by the lifting in restrictions over May and June, enticing sellers to the market," he said.

Christopher said the annual increases in Sydney and Melbourne also indicate a weakening market, particularly in the latter, which was recently put under lockdown again due to the rise in COVID-19 cases. This could mean that prices are likely to go down further in the next few months.

"Outside the two capital cities, the market is more balanced, and indeed we are seeing an increase in demand for housing across regional Australia," he said.

National home values fell by 0.6% in July, according to the latest report from CoreLogic. Melbourne led the decline, with its median value falling by 1.2% during the month.

"The extent to which this causes additional downwards pressure on home prices depends on how the Australian economy is travelling at that time. Further virus outbreaks present a clear and present danger to the depth and length of the recession, and the performance of the housing market," said Tim Lawless, head of research at CoreLogic.

The table below shows the changes in listings in July: 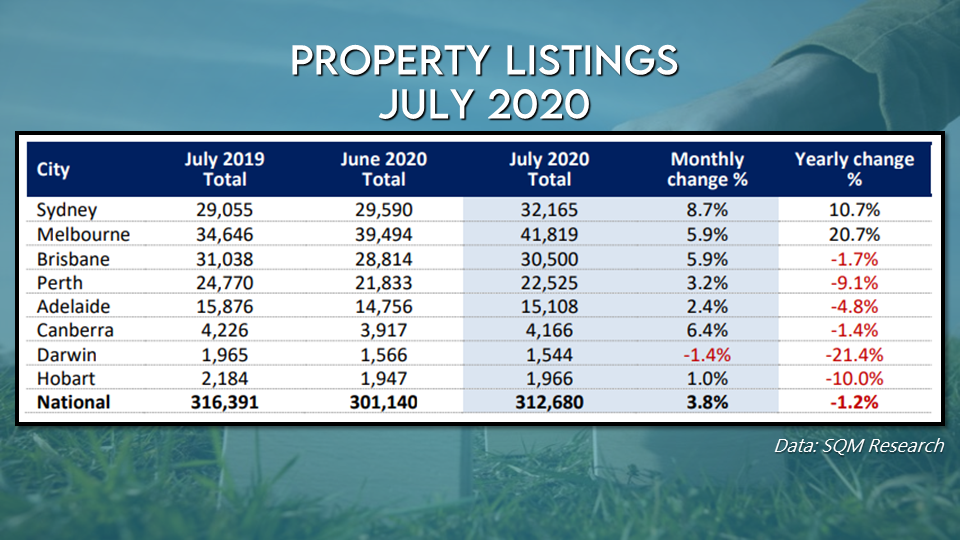