Sydney and Melbourne managed to post double-digit annual home-price gains in February, leading the overall growth in national house prices, according to the latest figures from CoreLogic.

Sydney's median house value now stands at $872,934, while Melbourne's is currently at $689,088. These two cities offset the weakness felt in Darwin and Perth, where prices declined by 7.8% and 4%, respectively.

On a monthly basis, the growth in house prices stood at 1.1%. All capital cities, except Darwin, posted smaller gains over the month, with Sydney and Melbourne still leading with respective upticks of 1.7% and 1.2%.

"While there is large variability in capital growth from region to region and across the product types,  every capital city is showing an upwards trajectory, demonstrating a geographic broadening in the recovery as low mortgage rates and better access to housing credit fuel buyer demand," said Tim Lawless, head of research at CoreLogic Asia Pacific.

Despite the gains it recorded over the month, Sydney prices remained 3.7% below the peak recorded in 2017. However, Lawless said the current pace at which prices are going could result in the overall index reaching a new nominal high over the next two months, with Sydney hitting a nominal recovery by the end of May.

The numbers also suggest that the dry spell in Perth is finally over. During the month, dwelling values in the city increased by 0.3%, marking the fourth consecutive month of growth.

"Although Perth values are now trending higher, the recovery period is likely to be a long one, with Perth housing values remaining 21.0% below their peak," Lawless said.

While regional areas continue to be in a stable position, the gains they recorded over the same period were not as strong as those in capital cities.

"The diversity across regional Australia is extreme, with drought-affected areas impacting the regional index. Meanwhile, the regional centres adjacent to the largest capitals, as well as coastal lifestyle markets, show a stronger performance," Lawless said.

Check out the table below to see the changes in house prices for the month: 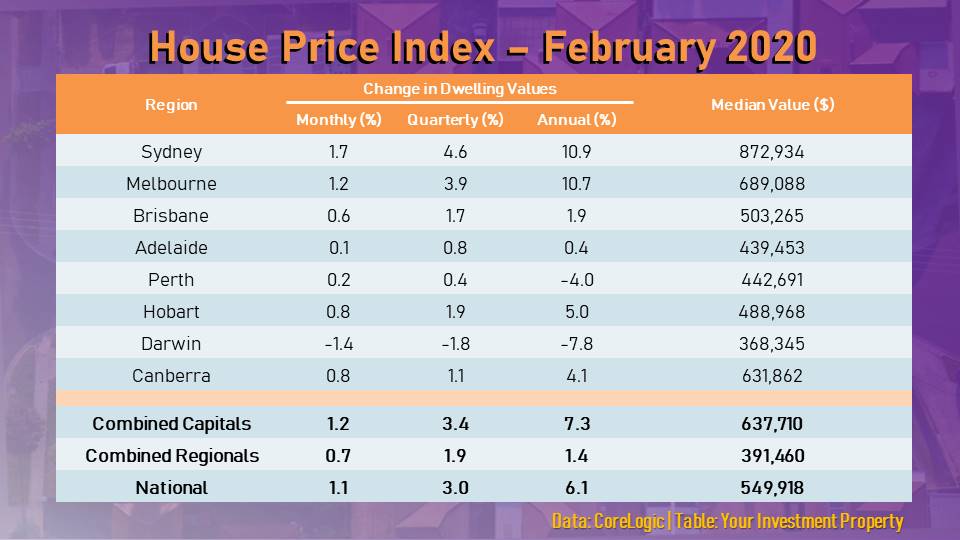