2032 Olympics to triple Brisbane’s median house price to $1.7m - should buyers be worried?

SHARE ARTICLE
Advertisement
International events and price gains in Brisbane What happened after the Sydney 2020 Olympics? What opportunities will the 2032 Olympics unlock for buyers?

Brisbane's successful bid to host the 2032 Olympics will certainly have a massive impact on the local property market, with one economist predicting the median house price will triple to $1.7m.

While the Olympics is still 11 years away, past international events the city hosted could give a glimpse as to what could happen with house prices.

Brisbane is no stranger to hosting the world's biggest events. Two key events that took place in the city in the past were the World Expo in 1988 and the G20 Summit in 2014.

An analysis by PRD Research showed a surge in prices during the 11 years prior to and the year after these two events.

For instance, the median price in Brisbane had increased by 278.8% during the period prior to the Expo 1988. House prices in South Bank and its surrounding suburbs more than tripled at the same time.

A similar trend unfolded when the city hosted the 2014 G20 Brisbane Summit.

In the decade before the event, property prices surged by 112% in Brisbane and 116% in South Bank and nearby suburbs.

"It is clear from the above key findings that hosting both Expo 1988 and G20 Summit has served the Brisbane property market well,” said PRD Research chief economist Dr Diaswati Mardiasmo.

“That is both in the short term of one year after the event, and the long term throughout the 12 years’ time frame of preparation, hosting, and post-event.”

Taking into account these two events, Dr Mardiasmo predicts property prices in Brisbane could rise to $1.7m by 2033, a year after the Olympics.

"That said, data shows property price growth move at different speeds. Because of this difference, there is a potential that Brisbane’s median house price will not travel as far," Dr Mardiasmo said.

Dr Mardiasm noted there were differences in the pace of property growth in past events, but even going at “half-strength” would still see the median house price reach $1.2 million by 2033.

What happened after the Sydney 2020 Olympics?

The historical data of house prices during the Sydney Olympics in 2020 can also give an insight as to how prices could behave in Brisbane.

"Bearing in mind Olympics 2032 is still 11 years away and based on how the Brisbane market is travelling, the potential to eclipse this price point is high,” Dr Mardiasmo said,

“Regardless of the calculation method, the conclusion points us to Brisbane becoming a $1m median house price city sooner rather than later.” 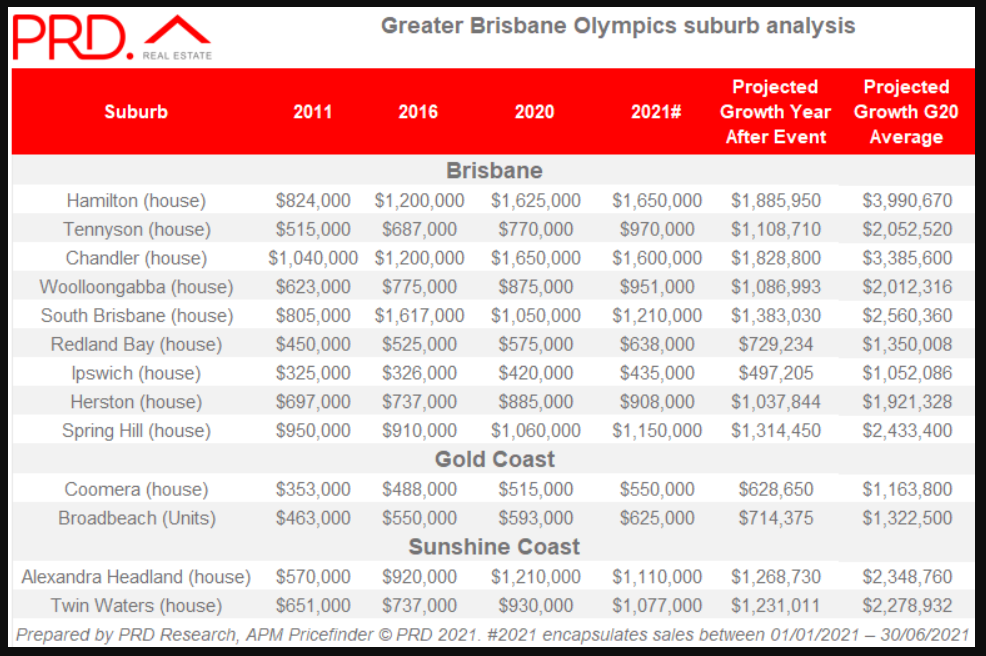 What opportunities will the 2032 Olympics unlock for buyers?

Dr Mardiasmo said local buyers still have an advantage today given the demand from international buyers is limited due to the pandemic.

"A key question is whether or not Olympics 2032 will make Brisbane, from a purchasing power perspective, as unaffordable as Sydney," she said.

"But the Games is 11 years away – this gives time for the world to re-open, economies to recover – and already we are seeing record-breaking property sales."

Dr Mardiasmo said it is interesting to see how the Athlete's Village — which is set to rise in the Northshore Hamilton Priority Development Area — will be repurposed after the Olympic games.

"It is predicted in total this new land supply will catalyse $500M in private investment and create 1600 construction jobs," she said.

However, she noted it was important for the government to work together to create crucial infrastructure and increase land supply for housing to remain affordable, given the potential demand the Olympics will attract.

"We know we have 11 years. So, no matter where or what your property journey may be, now is the time to weigh up your options and formulate a strategy," Dr Mardiasmo said.