Released yesterday, CoreLogic’s latest Rent Review has shown the combined capital city rental rates remained at $489 per week for houses and $469 per week for units during May; however rents were 0.3% lower year-on-year compared to May 2015.

“It is anticipated that the weakness in the rental market will persist and where on an annual basis, we’ll see rents fall further over coming months,” Kusher said.

“Since we started tracking annual rent changes back in 1996, the May 2016 results represent the lowest annual change on record,” he said. 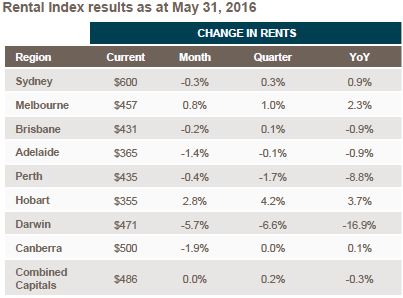 Kusher said there was a range of factors that have played a part in the weakening of rental conditions.

“A number of factors such as the softest wages growth on record have contributed to this slow down,” he said.

“At the same time, we also saw unit construction hit record high levels and a lack of population growth which has contributed to a lesser demand for rentals.

The year-on-year fall in rents was driven mainly by the continual deterioration of conditions in Perth and Darwin.

The remaining capital cities did see rents grow in the 12 months to May, however it was mostly subdued.

Hobart saw the highest annual growth rate at 3.7%, followed by Melbourne at 2.9% while rents grew in Sydney and Canberra by 0.9% and 0.1% respectively.

The slow rate of rental growth, along with strong capital growth seen in many markets recently has also impacted rental yields.

At a combined capital city level, gross rental yields were recorded at 3.3% for houses in May 2016 and at 4.2% for units, both of which are record lows.