Auction markets across capital cities continued to show signs of improvement as restrictions are being lifted by state governments, according to CoreLogic.

Over the weekend, 867 homes went under the hammer, up from the previous weekend's 612 homes. Preliminary figures show that 65.9% of the auctions over the weekend were successful.

Caitlin Fono, analyst at CoreLogic, said activity continues to be more muted compared to last year and the months pre-COVID-19. Over the same period last year, 1,661 homes were auctioned. However, the number of auctions over the weekend showed that the market activity is on its way to recovery.

"The trend has been towards more auctions held and a substantial reduction in the proportion of auctions withdrawn prior to the event. The number of auctions held this week was the highest since the week ending 19 April," she said.

Also read: How To Reap A Profit From Property Auctions

Melbourne dethroned Sydney as the most successful auction market, with 71.9% of 259 auctions pushing through a sale. However, Sydney remained the busiest, hosting 469 auctions that returned a preliminary auction clearance rate of 68.1%.

"Property is a long-term asset acquisition; it cannot be lumped in with share-market volatility. We cannot predict what will be happening in the housing market in six months' time, but the data makes it clear, it is not collapsing around us right now."

The table below show the recent auction figures for each capital city: 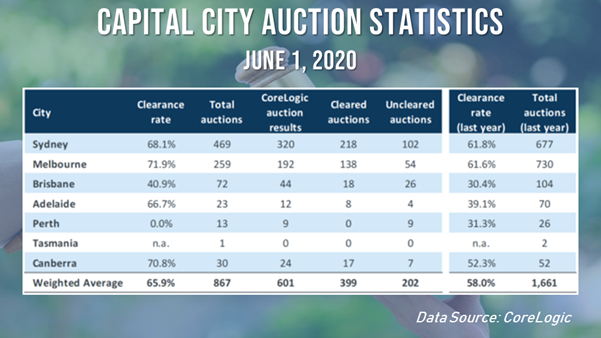