Australia's capital cities, save for Sydney and Melbourne, are now witnessing gains in house prices, reflecting an upturn in housing market sentiments, according to CoreLogic's latest market update.

Darwin reported the highest monthly growth among all capital cities in September at 1.6%, followed by Adelaide (0.8%) and Brisbane (0.4%).

However, national dwelling prices were still in the red, down by 0.1%. This decline was due to the persistent drop in Sydney and Melbourne's housing values.

Melbourne and Sydney make up around 40% of Australian’s housing stock by number and 55% by value. Declines in these two cities pushed the national figure into a fifth straight month of decline.

"By far the weakest result across the capital cities, Melbourne housing values were down 0.9% in September.  Since peaking in March, Melbourne values are down 5.5%. With restrictions starting to lift and private home inspections once again permitted, we expect to see activity lift in October," said Tim Lawless, CoreLogic's head of research.

The table below shows the changes to house prices across capital cities: 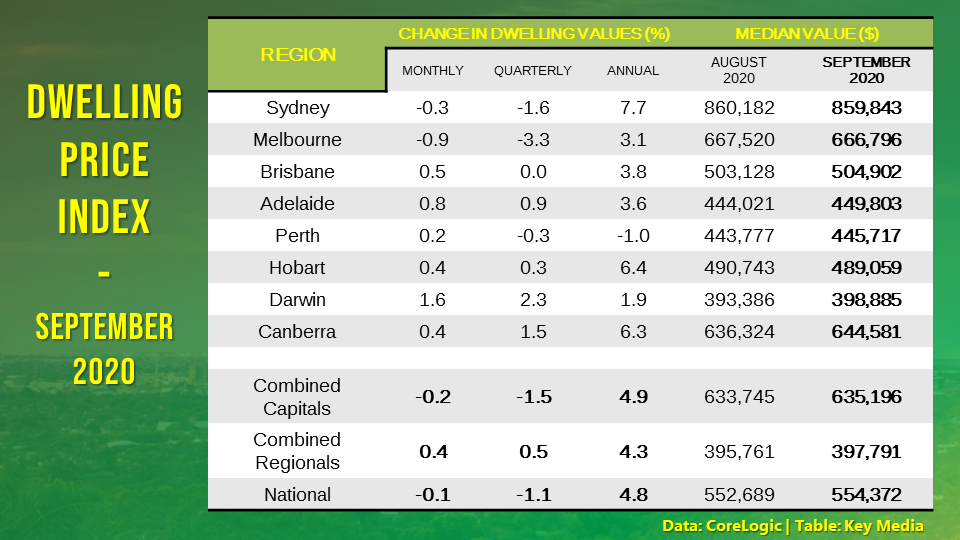 On an annual basis, however, prices in capital cities were 4.9% higher than last year. This was slightly higher than the 4.3% annual gain in regional markets.

Furthermore, there appears to be a transition of demand away from the cities towards the major regional centres, particularly those that are adjacent to the larger capitals where residents can commute back to the cities if required.

"Remote working arrangements are no doubt a factor in supporting demand in these markets, but lifestyle opportunities and a desire for lower density housing options are also playing a part," he said.