Home    news   How to be a young property tycoon

How to be a young property tycoon

At age 40, today’s young people will be purchasing their first properties later than any generation before them. 2013’s average first homebuyer is already an alarming 31 years old, a sizeable departure from the 1980s when most first time buyers were in their mid-20s.

Feeding this trend is the fact that Australian property prices are increasingly out of reach of the salaries that young people typically get. For most Aussies in their early 20s, purchasing a property in a major Australian city (for in all likelihood over $400,000) doesn’t seem like a realistic prospect when you’re in an entry level position earning less than $50,000 a year.

Amid this heightening ceiling for entry prices, the remarkable thing is that a handful of motivated youngsters have still managed to build healthy property portfolios at a very young age – even as young as teenagers. What are they doing that everyone else isn’t?

Meet three investors who prove that nothing is impossible for super-young investors who learn their way around the market: Hassan Najjarine, Tony Fleming and Michelle Alkins.

None of these investors started out as high income earners. None had rich parents. In fact, all worked relatively low paying jobs when they first started investing in property and all struggled to save for a deposit. Despite this, these three investors have, between them, built up millions of dollars in equity.

The secrets they share are enlightening for anyone – young or old – trying to get into the property market. As they say, age is just a number. Wisdom is eternal.

Check out the full story of these remarkable Australians in the October issue of Your Investment Property - available in newsagents NOW! 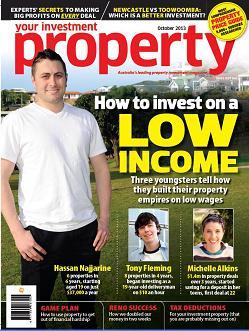