Home    news   Perception or reality: What does an Australian real estate investor really look like?

Perception or reality: What does an Australian real estate investor really look like?

Of the total property market, investors account for 2.6 million dwellings with a combined value of $1.37 trillion.

Recent years have seen investors steadily increase their grip on the market, with CoreLogic’s report showing that as of April 2016 investors accounted for 26.9% of Australia’s residential market, up from 22.3% two years prior.

While there has been a heated debate in the lead up to the Federal Election on 2 July around housing affordability and the role investors play in that, CoreLogic research head Tim Lawless said yesterday’s release of report was to better educate those involved in that debate and not as a criticism or endorsement or policy proposals put forward by political parties.

“Given investors own almost one third of Australia’s housing and comprise almost half of the demand for new mortgage commitments, for politicians, investors and the public at large, having an understanding of the typical profile of the Australian property investor is important,” Lawless said.

“This report is not intended to support, or implicitly criticise any political party’s taxation policy or policy platforms, but rather provide unbiased, independent statistics and analysis to inform the current housing debate,” he said.

According to CoreLogic’s analysis of Australian Taxation Office figure, investors claimed $3.7 billion worth of losses via negative gearing over the 2013/2014 financial year, down 34.2% on the $5.6 billion claimed in 2012/2013 and down 59% from the peak of $9 billion in 2007/2008 and Lawless said those reductions are likely to continue.

“As interest costs reduce, the ability to claim a rental loss reduces because the interest deduction is overwhelmingly the single largest deduction available. With interest rates moving even lower since June 2014, we would expect net rental losses will reduce even further over the coming years, but are likely to increase when interest rates rise,” he said.

According to CoreLogic, 2.03 million Australians, or 15.7% of the population, are property investors, with each investor on average owning 1.28 properties.

Those properties are likely to be towards with the lower end of value brackets, with 53.4% of investment-owned dwellings have a current estimated market value of less than $500,000, compared with 46.9% of owner occupied dwellings. 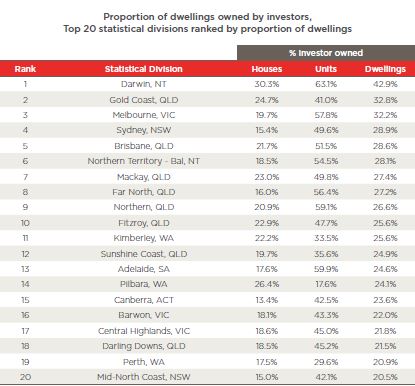 That concentration is even higher in inner city unit markets, with investors accounting for 60% of unit stock in Victoria and South Australia and approximately 50% in New South Wales and Queensland.

In general, investors favour city markets in proximity to office precincts, universities and hospitals; however resource and tourism dominated areas such as the Gold Coast and Far North Queensland also have significant investment concentrations.