Property prices across Australia remained on an uptrend in August, but further signs of cooling continued to emerge.

Figures from CoreLogic show a 1.5% monthly rise in dwelling prices on a national level. While this was still well above average, it was also the lowest monthly gain since the start of the year.

The increase was apparent across the board, except in Darwin, which reported the only monthly dip in prices at 0.1%.

For this monthly update, CoreLogic did not include Western Australia and Perth in the index given the pending resolution of the divergence of the local market indicators.

Wage growth fails to keep up

CoreLogic research director Tim Lawless said August's index reading is a far cry from the peak early in March, when prices rose by 2.8%.

Mr Lawless said the slowing down was due largely to worsening affordability constraints rather than the recent lockdowns.

"Housing prices have risen almost 11 times faster than wages growth over the past year, creating a more significant barrier to entry for those who don’t yet own a home," he said.

"Lockdowns are having a clear impact on consumer sentiment, however to date the restrictions have resulted in falling advertised listings and, to a lesser extent, fewer home sales, with less impact on price growth momentum."

On an annual basis, property values rose by 18.4%, the strongest gain reported since 1989.

In contrast, wages have been increasing at an average rate of 1.7%.

While the recent lockdowns are not a major factor driving the slowing gains, they still had adverse impacts on activity as both supply and demand decline.

The total active listings also trended lower, down 29.4% below average.

Further, home sales retracted, down by 9% over the three-month period.

Mr Lawless said despite fewer buyers over the past three months, sales remained 30% higher than the five-year average.

"We are still seeing a disconnect between advertised supply and housing demand, even in the cities where lockdown restrictions are active which is keeping upwards pressure on housing prices despite challenges faced by both buyers and sellers," he said. 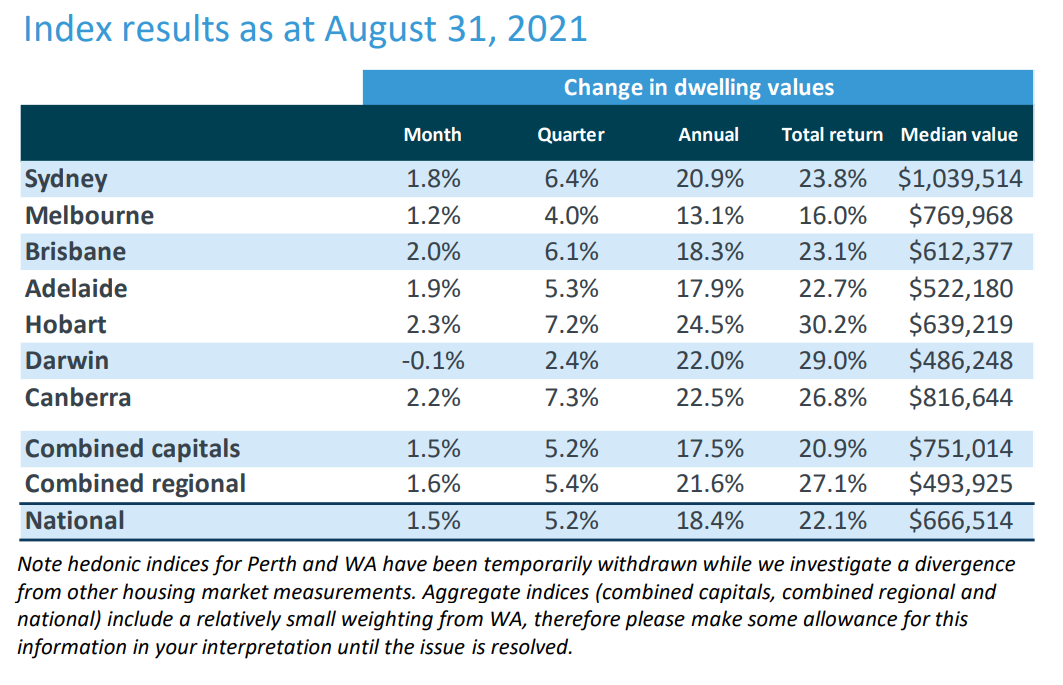