Home values across capital cities remained on an uptrend in April despite the slowdown in market activity due to COVID-19, according to the latest report from CoreLogic.

On a monthly basis, national house prices clocked a 0.3% growth, putting the median value at $557,739. The median price of homes in the month was higher by 2.1% on a three-month basis and 8.3% on annual terms.

While the movement of prices was still on the positive side, the rate at which they are growing appears to have already slowed down. In fact, the recent gain in prices was the smallest month-on-month movement since June last year.

"Although housing values were generally slightly positive over the month, the trend has clearly weakened since mid-to-late March, when social distancing policies were implemented and consumer sentiment started to plummet," said Tim Lawless, CoreLogic head of research.

On the other hand, Melbourne prices started showing weakness, posting the sharpest reversal in growth conditions. During the month, prices in the Victorian capital declined by 0.3%.

"Sydney and Melbourne arguably show a higher risk profile relative to other markets due to their large exposure to overseas migration as a source of housing demand, along with greater exposure to the downturn in foreign students, stretched housing affordability and already low rental yields that are likely to reduce further on the back of rising vacancy rates and lower rents," Lawless said.

Hobart was the only other capital city to report a drop in median value at 0.1% to $484,645. Lawless said this could be due the city's exposure to the industry sectors that are heavily impacted by COVID-19 in terms of employment.

The table below shows the performance of each capital city over the month: 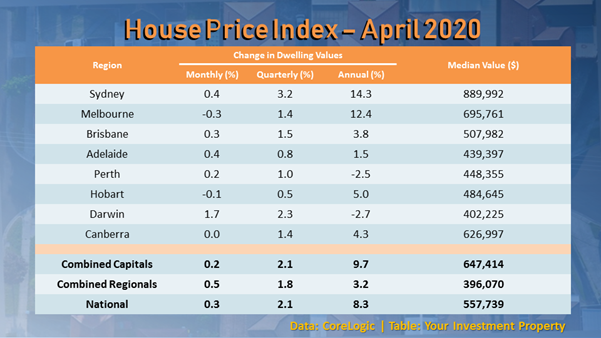