SHARE ARTICLE
Advertisement
While Australia’s regional property markets may not have experienced the same price growth their capital city counterparts have in recent years, they appear to be leading the way when it comes to rental growth.

Rental analysis across the year to 30 June by CoreLogic shows regional areas have experienced rental growth in the past 12 months that capital city markets could only dream of.

“While rental rates are falling in many capital city regions, today’s data suggests that in mid-sized and coastal regional markets, rental demand is picking-up. These regions have also been seeing a rise in migration over recent years,” Kusher said.

“Perhaps we are seeing evidence of try-before you-buy in these regions where people are moving into the regional areas and renting before fully committing to a purchase,” he said.

At a local government area (LGA) level, Eurobodalla on the New South Wales south coast was home to the strongest growth for house rents in the year to June.

Over the 12-month period, the median house rent in Eurobodalla grew 25% to $450, while the Kempsey LGA on the NSW mid north coast was the next best performer with the median rent growing 16.7% to $350 per week.

Berri Barmera LGA in eastern South Australia was the next best performer with the median weekly rent growing 13.6% to $250 per week, followed by the Clarence Valley LGA in NSW where the median rent grew 13.3% to $340 per week.

The Manly LGA was the fifth best performer over the year, up 12.5% to $1,350, and was the only capital city LGA among the 25 best performing Australian LGA’s for house rents in the year. 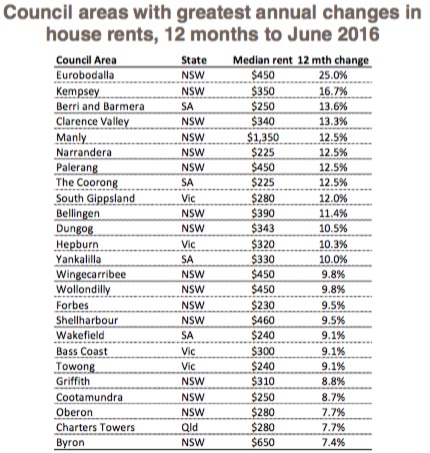 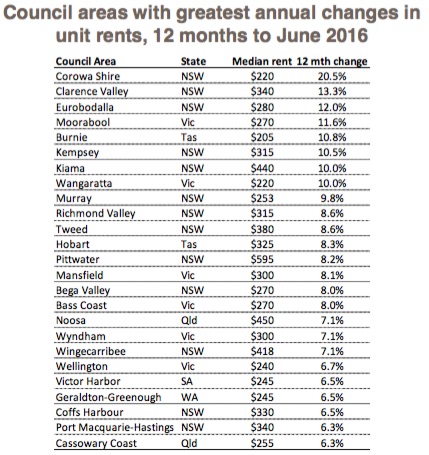 Tasmania’s Hobart (12th), NSW’s Pittwatter (13th) and Victoria’s Wyndham (18th) were the only capital city LGA unit markets among the best 25 performers in the year to June.

For the unit markets, Kusher said the fact that many of the best performing LGA’s were in coastal areas suggests they are benefiting from a weakening Australian dollar.

“The fact that units rents are increasing in many coastal locations is potentially reflective of the recovering markets spurred on by a lower Australian dollar and an improvement across the tourism sector,” he said.