Regions with most satisfied sellers

The impacts of the COVID-19 outbreak on the economy and the housing market have failed to significantly dampen the sentiments of sellers across Australia, as overall market satisfaction continues to improve from last year, according to the latest report from RateMyAgent.

Satisfaction levels amongst sellers increased to 39% in June, up from 27% last year. These levels stabilised after a sharp drop observed in April.

Mark Armstrong, executive director of RateMyAgent, said April was a "particularly tough" month for home sellers, with all states reporting declines in sale price happiness. During the month, only 35% of Australian sellers reported an above-expectation sales price.

"This is reflective of the high levels of economic and consumer uncertainty around the business impact and government restrictions associated with managing the COVID-19 pandemic," he said.

The consumer uncertainty over the March-to-June period also contributed to the drop in satisfaction levels amongst sellers. However, the stimulus packages by the state and federal governments have provided a buffer, providing a level of security to what would be an otherwise quite volatile economic period.

"Looking to the next six months of 2020, Australian sellers and buyers can anticipate stable levels of vendor happiness if stock levels remain low. However, a potential increase in the supply of property as we enter the spring market may dial-down buyer competition and thus see happiness decrease," Armstrong said.

Of all states and territories, sellers in the Australian Capital Territory were the most satisfied. The ACT took over Tasmania as the happiest state for sellers. Armstrong said buyers and sellers in the territory remained active despite the pandemic.

"Job growth and stable government employment have brought strong competition to the local market, meaning vendors are achieving great prices on their property sales," he said.

Canberra is the happiest region in Australia, achieving a satisfaction level of 47%. Hobart follows with an overall satisfaction rating at 46%.

However, Victoria suburbs and regions dominated the list. Despite the satisfaction level in the state only hitting 38% in the quarter, six Victorian suburbs cracked the list of the 10 happiest regions over the quarter. 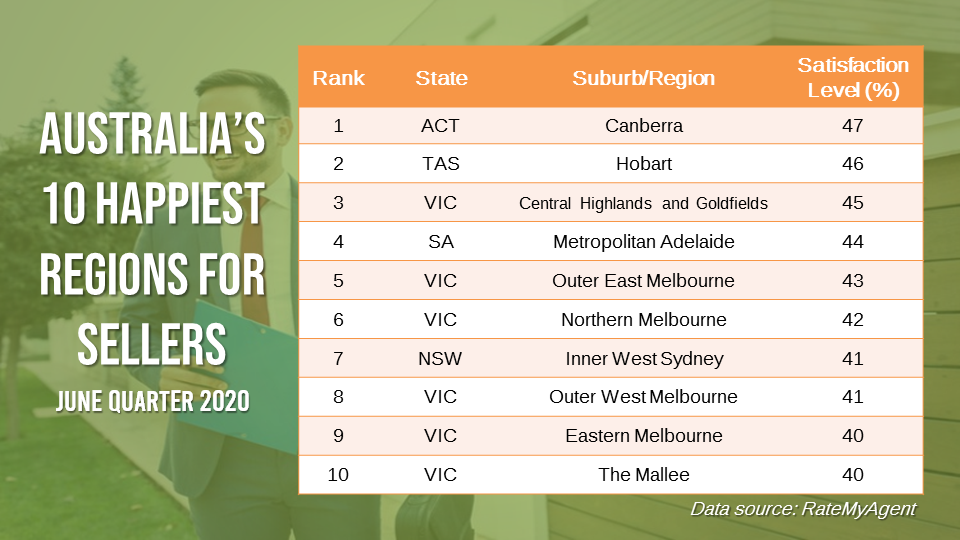