Home    news   Rents improve across the board

Rents improve across the board

Rents across major capital cities continued to increase in January, indicating an improvement in the rental market, according to the latest report from CoreLogic.

Over the month, the national median rent went up by 0.5%, hitting $440 per week. Eliza Owen, head of residential research at CoreLogic, said this was the strongest monthly growth in the national rental index since January 2018.

"It is clear that the rental market is starting to gain momentum again as the investment properties from the previous upswing are absorbed, and new development levels have moderated. This means tenants can expect higher rents in most capital cities," Owen said.

Rental rates across the combined capital cities have been on the uptrend since September, following the start of the rise in dwelling values in June 2019 and the decline in new dwelling construction.

Across the combined capital cities, the median weekly rent stood at $467, a 0.5% increase from a month ago.

The biggest monthly increases were recorded in Sydney, Canberra, and Hobart, where rents rose by 0.7%. Incidentally, these three cities also reported the highest median weekly rent in the month at $574, %556, and $470, respectively.

On an annual basis, weekly rents in Sydney have declined by 0.6%. This downtrend, however, appears to be already shrinking.

Hobart, on the other hand, registered the most significant jump in rents on an annual basis at 5.8%.

"Hobart presents a continued crisis in the rental market, with the strongest growth in rents, a tight level of vacancy, and a growing short-term rental accommodation market crowding out long-term tenants," Owen said.

The table below shows the changes in median rents across capital cities: 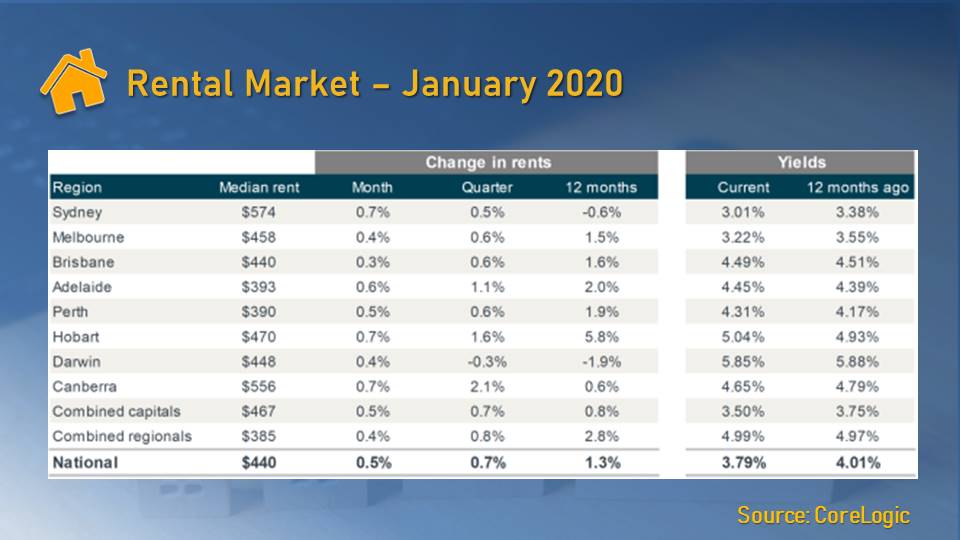