Australia's housing market clocked its second month of price declines amid the ongoing COVID-19 pandemic. Despite this, markets continued to show increased activity, the latest report from CoreLogic shows.

National house prices declined by 0.7% in June, with Perth and Melbourne reporting the most significant decrease at 1.1%. Of all capital cities, only Hobart, Darwin, and Canberra reported gains in dwelling values of the month.

This downward pressure on home values is considered mild, with capital cities recording a cumulative decline of 1.3% over the past two months, said Tim Lawless, head of research at CoreLogic.

"A variety of factors have helped to protect home values from more significant declines, including persistently low advertised stock levels and significant government stimulus," he said.

Furthermore, Lawless said the market also benefitted from the low interest rates and the forbearance policies from lenders.

"These factors have helped to keep urgent sales off the market, providing further insulation to housing values," he said.

In fact, despite the decline in values, the market remained busy over the month with a 29.5% estimated sales growth, extending the 21.5% surge in May.

On an annual basis, prices maintained their solid position, with Sydney and Melbourne recording double-digit upswings of 13.3% and 10.2%, respectively.

The only capital cities where values show declines on an annual basis are Perth and Darwin, but even across these cities, home values were early into a recovery phase pre-COVID-19.

However, Lawless said there remains uncertainty on where the market will go on a longer-term.

"While it is encouraging to see lenders have recently hinted at an extension in their repayment leniency policies, the government stimulus will eventually taper and banks will require borrowers to repay their loans.  The longer-term outlook for the housing market is largely dependent on how well the economy is tracking when these support measures are removed," Lawless said.

The table below shows the price movements in each capital city over the past month: 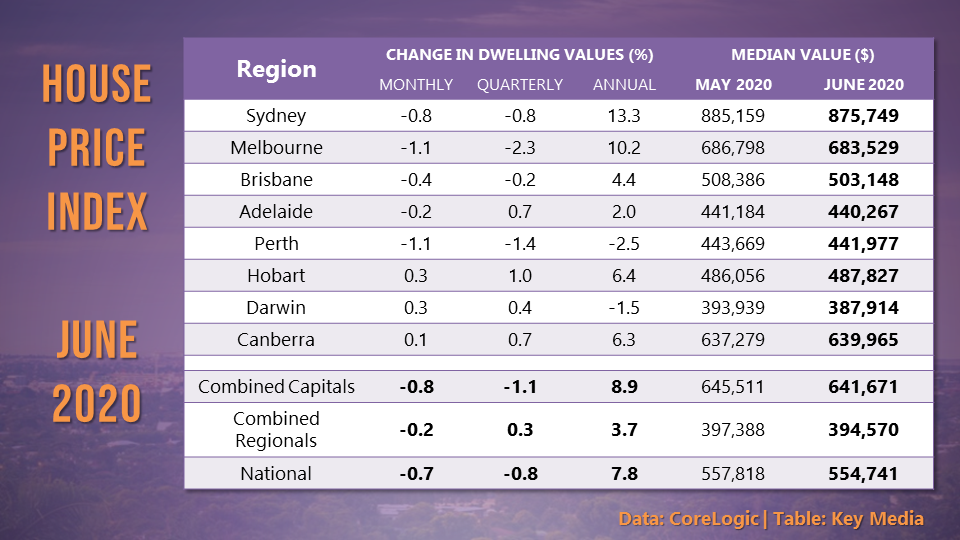