The ultimate guide to developing: The experienced developer

“It’s not about doing better than your first project; it’s about profit. You are running a business; your objective is to sell that which sells.”

Project manager at Metropole Projects Bryce Yardney says people sometimes make the mistake of thinking they should take on a larger-scale development as their second project.

“There is a big step involved in going from smaller to bigger, from less complex to more complex,” he says. “Financing for a smaller development could be as simple as getting an investment home loan and then getting a construction loan, whereas if you start getting into something bigger or more complex next time, you might be looking at a commercial loan, which could involve more of your own cash and equity; you might have to have presales; you might have a different interest rate. So sometimes sticking to what you know and repeating it can be a much safer bet than thinking bigger is better.”You don’t have to do it on a full-time basis to be profitable either, and you don’t have to be the best the best of the best to be profitable. Success here really comes down to honing your skill set to find out what you’re good at, and then exploiting that skill set for profit.

Doing your due diligence

Explaining how a property developer or investor can best approach their next project, Tony Nicolo, senior property investing mentor at Results Mentoring, says it’s important to focus on your ultimate outcome.

“[Upscaling the] finishes and designs doesn’t make a whole lot of difference. It really is about increasing the number of projects; in other words, doing things quicker and more efficiently,” Nicolo says.

“You’re actually looking at a better profit from each project. [The product] always has to match what the market expectation is, and the affordability for a consumer is the most important part.”

When there is any inclination to elevate the design, it’s important to understand how it can directly impact the end value of the development – because while a specific architectural design might be visually appealing, it may not be received well by a specific market, or aligned to what consumers in that market are willing to pay.

The idea is to create something that is always going to be in strong demand, and this also rings true when developing a property for the purpose of holding it as an investment.

For instance, it’s much easier to sell a standard house or a spacious three-bedroom townhouse than it might be to sell an apartment or a complex of 30 apartments, but you really need to understand the demographics of the area, says Perpetual Projects director Peter Fanous

“If you are developing in Sunshine [in Melbourne], you can do beginner, entry-level terraces and small townhouses, but you can’t do the same thing in a suburb like Doncaster,” he explains.

“Furthermore, you could have two properties on the same street in Doncaster, and one house is eligible for school zones and one isn’t – and you’ll find that the price difference between the two is $200,000.”

Working out your own goals is essential to the due diligence process, adds Damien Lee, Caifu Property’s head of acquisitions. While some wouldn’t get out of bed for the potential profit on one deal, it could be a perfect fit for others; it all depends on personal objectives.

“Developers can invest themselves not just emotionally but personally into the project, in that the project is a reflection of themselves … and therefore costs go out the window”

“If you have a deal that will make a 20% return, but it’s going to be a three-year project and you are going to have sleepless nights for the next three years, does that mean you want to do the deal?” he says.

“You need to find what is a goodquality development based on time to execute versus a profitable deal, asking: is it profitable enough for the time outlay and the risk associated with it? That’s the way I assess all of my deals personally. It’s risk versus reward.”

Deciding on your exit strategy from the start is one essential aspect of the process. But determining how to position each development for the means of propelling your future goals is another added layer. And what happens if the market takes a turn midway through construction?

“You go in knowing what you want to do; that’s the objective. Then contingency comes into play. If you plan to build three [houses on one plot of land] but the market changes, you might plan to hold off on construction and wait for the market to improve, in which case you can rent out the existing house instead of demolishing it,” Kelly explains.

“If it works out that you’re halfway through, then you might finish building, then rent [all three houses] out until the market improves, to preserve profit. So it’s contingency and management but based on your primary objective.”

To ensure that the development’s exit strategy remains valid, it’s important to continually monitor the market during the entire development process, he adds.

Kelly says an ideal way to move on to your second development project is by drawing on the success cultivated from your first project.

“Generally speaking, you would wait until the first one is sold, finished and completed. You have a profit and you would have your buying capacity back, and then you would go and start again,” he says.

While selling for a profit can provide an advantageous leg-up, there is also reward in managing the property as an investment for the long term. Those investors with a long-term view will not only benefit from depreciation and negative gearing benefits along the way, but will also enjoy the capital growth the property generates.

When Fanous completed his first two-house development, he sold one house and now continues to manage the second house as a rental.

“I have still retained one, and that has been my approach since the beginning. Always retain something from what you manufacture,” Fanous says. 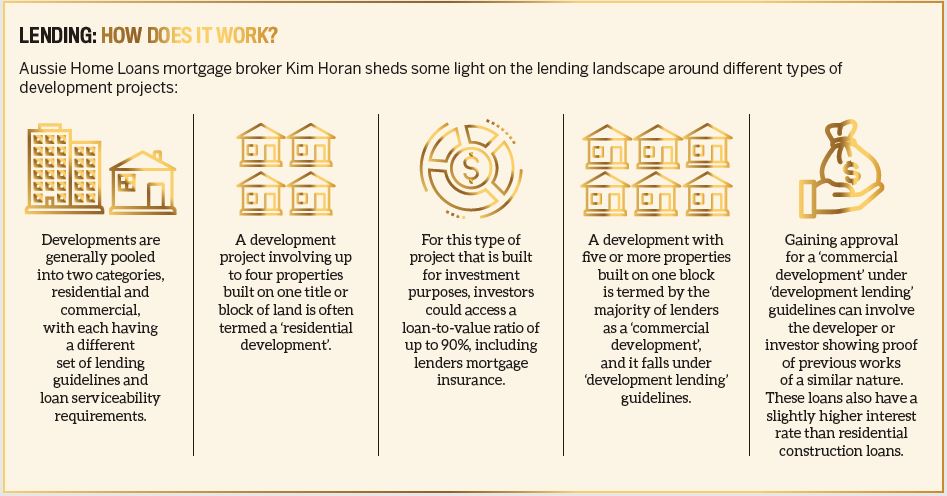 If you have a skilled and experienced team around you, it’s valuable to listen to their advice and ideas while ensuring that they align with your goals and interests, says Yardney.

A quality builder can become a long-term partner – someone who can help you sift through different ways of approaching a build, and the materials and methods used, while working to your final budget and deadline.

If something goes wrong during construction, they are also on board to assist in the problem-solving. But how does one find a skilled, adaptable builder?

Kelly says that while investors should aim to get at least four quotes from builders, he also recommends a visit to other development sites in the region.

“You watch how quickly the frame goes up and the activity that’s on site. If you find that [the builders are] there once a week or twice a week, well, they’re too busy and they can’t spend the time on your property. If you find that they’re there all the time, then you know that they are single-focused and that will serve you well for a speedy development.”

Variances in the building contract – which can occur after the construction costs have been finalised and while the work is underway – should also be approached with care.

“Variances are a way of inadvertently adding massive expense to construction and blowing your construction budget,” Kelly says.

Detailed planning is one of the greatest risk mitigators, he adds, and it also helps to prevent a developer from being emotionally swayed in the moment when responding to upgrades or modifications.

“If you have a good architect and a very good draftsperson, and you spend time on getting the plans precise and accurate, then what you can do is always refer back to the plan,” Kelly says.

Not reading over the building contract thoroughly can also reveal problems down the track, Nicolo warns. He also advises that a lawyer should read over the contract.

The big risk all developers face

Even with thorough planning, risk mitigation, a clear financial strategy and a solid team behind you, Nicolo says no development is completely risk-free.

“Developers can invest themselves not just emotionally but personally into the project, in that the project is a reflection of themselves … and therefore costs and everything goes out the window, just to develop this beautiful piece of artwork,” he says.

“Often this is where failure comes into it, because costs will overrun as they’ve got to have the best of everything in this property, but it doesn’t meet the market demands or certainly not the market’s financial expectations around price either.”

Lee says that as more houses are built on one plot of land, it will naturally increase the overall project costs, including the financing requirements.

“Everything goes up: the risk, the timeline, the time to construction,” he says.

“The land purchase price is higher overall because organically you need to buy a bigger block of land to put a subdivision through it, and you are now building two houses instead of one. So your construction build is a lot higher and you are now starting to pay things like town planning fees and headworks charges to the council to be able to physically develop two titles. It’s essential to keep this in mind and budget for it from the outset.” 6 Top things to consider when building an investment property How to make income as a new developer How kids impact your borrowing power The ultimate guide to developing: The beginner developer The ultimate guide to developing: The professional developer Building Defects: What Does It Mean For Property Investors? The highs and lows of property developing 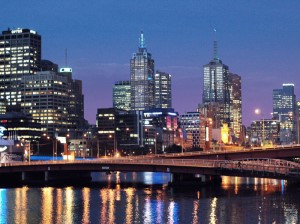 What is The Armchair Development Concept?

Catching the 1B Wave