These are the most affordable suburbs within 10km of each CBD

Australia’s property market has grown at an unprecedented rate over the past 2 years as economic stimulus and low mortgage rates have driven demand for property sky high, pushing property prices out of reach in many suburbs across the country.

And as Covid-19 lockdowns continued and the work-from-home trend became more permanent, many people flocked to suburban and regional areas in search for a better and bigger lifestyle.

But now the resurgence of Australia’s migration has pulled focus back to our cities, springing markets close to our CBD’s back into life.

Data analysis by Domain has revealed the top 5 best value suburbs within 10km of the CBD, in Sydney, Melbourne, Brisbane, Adelaide and Perth.

Here’s the full list for each major Australian city.

Sydney’s property market is the most expensive across the country, with a median house price of $1.6 million and more than a quarter of the city’s suburbs recording median prices in excess of $2 million.

Within a 5km ring of the city, Bellevue Hill has a median of a huge $7.27 million, and there are multiple suburbs where the median house price is upwards of $3 million or $4 million, such as Woollahra, Paddington, Cremorne, Greenwich and Birchgrove.

But not every one of Sydney’s inner suburbs are so out of reach.

There are some Sydney suburbs, most of which are in the inner west, which have a more affordable price tag, Domain’s data reveals. 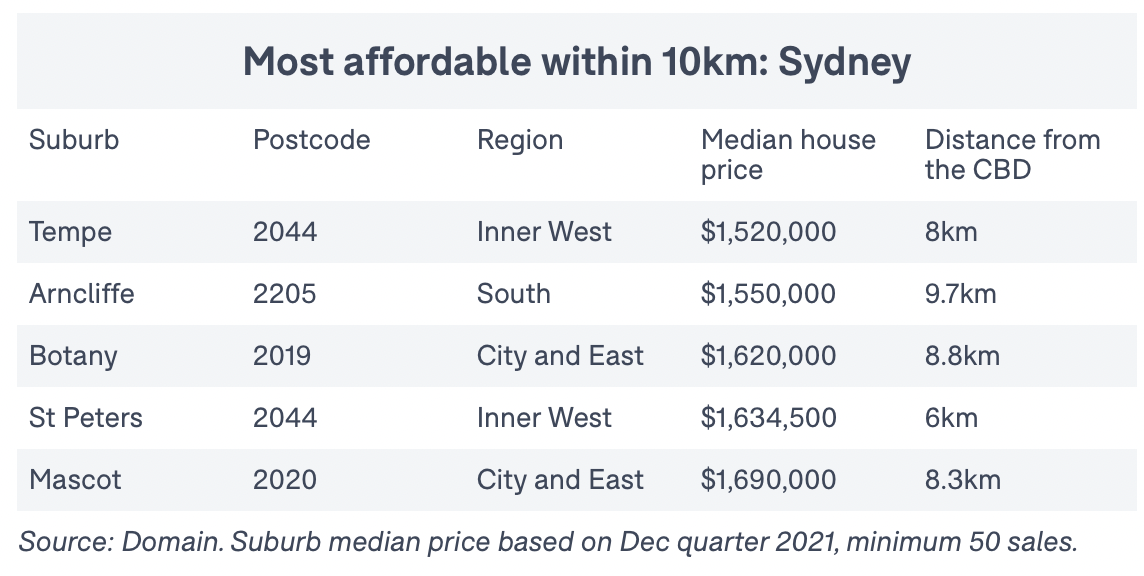 Tempe sits at the top of the list, at just 8km out of the CBD and with a median property price of $1.52 million.

St Peters, in Sydney’s inner west, is the closest to the city, located just 6km from the CBD with a median house price of $1.634 million.

Melbourne’s house prices reached a new record high at $1.1 million, which is the strongest annual gain since 2010, at 18.6% – this represents a $660 per day increase over the quarter.

Median property prices don’t come close to those in Sydney, but after a dip in the market in 2020 amid the extended state-wide Victorian Covid-19 lockdown, property prices have skyrocketed. 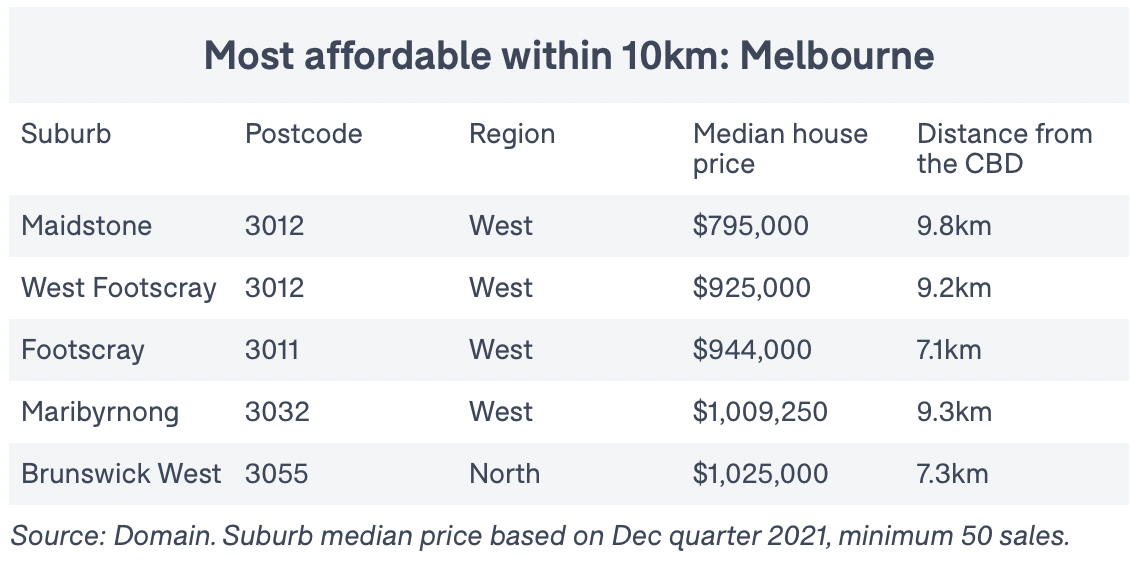 At just 3.7km from the city, you can find properties here around the $1.2 million mark.

But move out just that little bit further and you can get a lot more bang for your buck.

The city’s west hands out the best deals, mostly around 9-10km away from the CBD.

And by accepting the further distance, buyers can expect to pay as little as $795,000 instead of around the $1.2 million mark seen in North Melbourne.

Meanwhile, the close by suburb of West Footscray, a little closer to the CBD with a 9.2km distance, has properties around the $952,000 mark.

Brisbane’s house prices have seen the steepest annual climb in 13 years as the city’s property market comes to grips with relentless Covid-19-induced demand for property.

In 2021 the city experienced a once-in-a-generation property boom that resulted in almost 400 suburbs joining the million-dollar club. 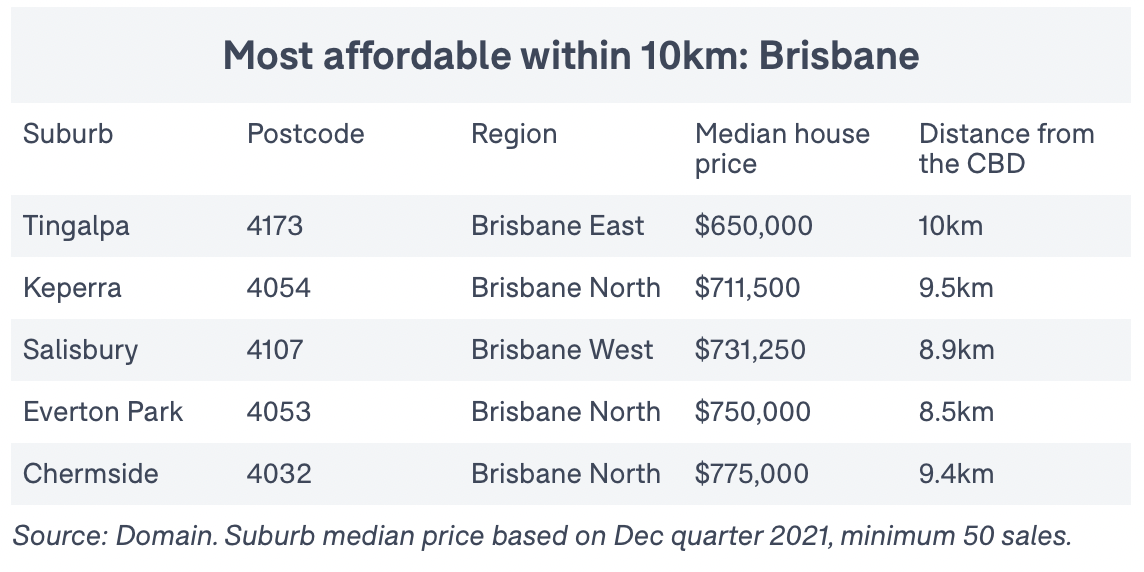 Top of the list of best-value suburbs within 10km of the CBD is Tingalpa, in Brisbane’s east, where the median price for a house is just $650,000.

Tingalpa is between the city centre and the bayside, about 10 minutes from Westfield Carindale and with easy access to the Gateway Motorway and airport.

Keperra, Everton Park and Chermside, all on Brisbane’s north side, as well as Salisbury on the south, have median house prices of less than $800,000.

Buyers can expect to pay over $700,000 for a house in Adelaide for the first time on record thanks to a rapidly rising price growth that shows no sign of slowing.

House prices recorded the steepest gains ever with an increase of 8.6% quarterly and 27.5% annually, setting a new record high of $731,547.

Demand for Adelaide property remains strong as the number of homes sold reaches its highest point on record with its tight supply-demand ratio continuing to heavily favour sellers. 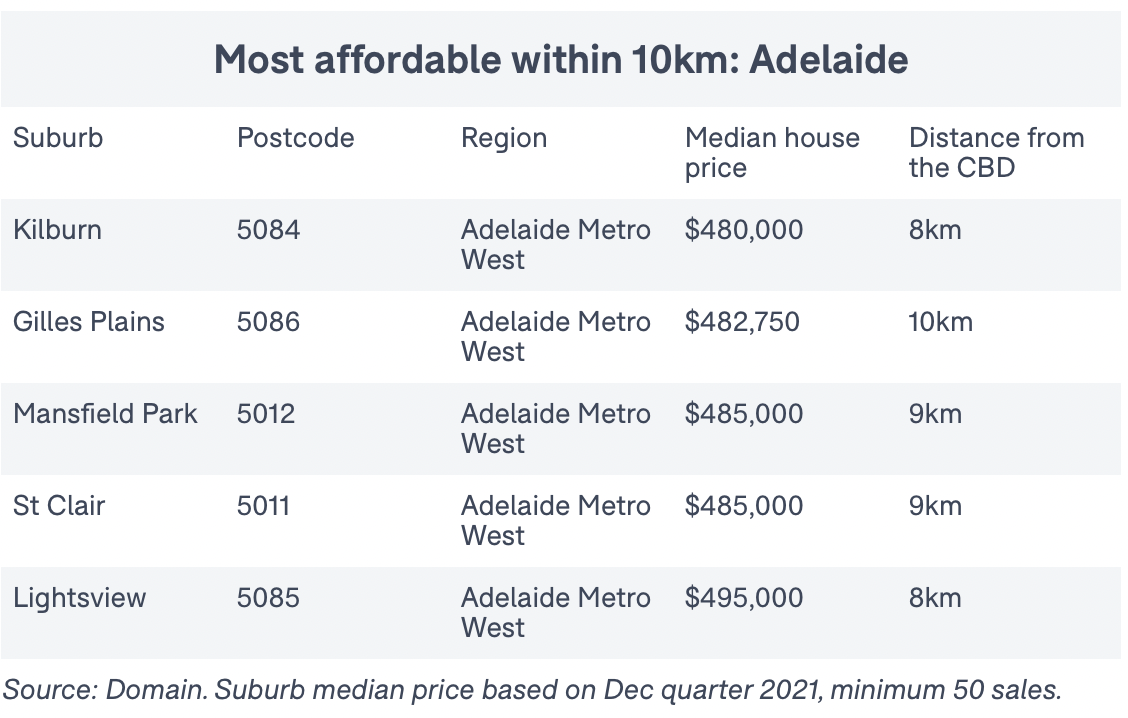 The top five best-value suburbs within 10km of Adelaide’s CBD all have a median house price of less than $500,000.

Topped by the inner-north suburb of Kilburn, they include Gilles Plains, Mansfield Park, St Clair and Lightsview.

Despite the increase in house and unit prices, the pace of growth has slowed compared to that seen in late 2020 and early 2021 and Perth continues to hold the title of the most affordable city to buy a house as prices swiftly rise across the other cities.

Interestingly, all the best value suburbs within a 10km radius of the CBD are cheaper than Perth’s overall median of $612,348. 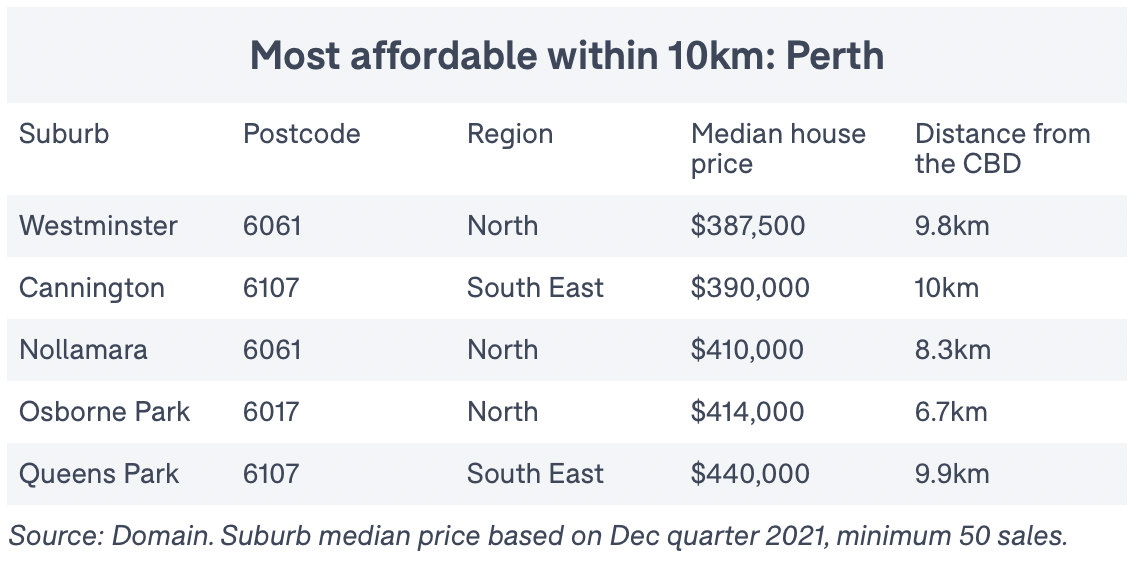 Westminster and Cannington are not only the most affordable suburbs within 10kms of Perth’s city centre, they’re also priced at less than $400,000.

In Osborne Park, the median house price is still only $414,000 despite the suburb’s location between the city centre to the east and Scarborough Beach to the west.

Planning to invest? Remember this

While this is an interesting list to look over, these ‘affordable suburbs’ aren’t areas where I would necessarily recommend investing.

Because even though these areas are considered ‘cheap’, their low median house prices alone aren’t enough alone to warrant a good investment opportunity.

‘Cheap’ property will always be ‘cheap’ so don’t get lured into thinking you’re getting a bargain.

Of course, we all know by now that location will do about 80% of the heavy lifting of a property’s capital growth.

And that’s why it’s important to buy your investment property in a suburb that is dominated by more homeowners, rather than a suburb where tenants predominate.

And I’d only be buying in suburbs where the locals have higher disposable income than average because they will be able to afford to, and be prepared to, pay more for their properties.

Overall, by focussing your research on what those often overlooked more affluent owner-occupiers are doing, you may just find an investment that outperforms the market and delivers strong value and growth over the long term.

Brett Warren is a director of Metropole Properties in Brisbane and uses his 18 plus years property investment experience and economics education to advise clients how to build their portfolios.

Are you thinking of putting off the purchase of your new home or your next investment property?

3 Lessons I Learned at Wealth Retreat 2022

What slowdown? This is where property prices are still growing

Why the ripple effect can only go so far

Most affordable suburbs within 5km of the CBD

10 most expensive streets in Brisbane, revealed

Australia faces housing supply shortage - is another price hike ahead?

Why Cash Flow Positive Property is a CON!

The Two Ingredients Missing for a Decade and Now Driving Brisbane’s Property Market.