Home    expert insights    brett warren   What slowdown? This is where property prices are still growing

What slowdown? This is where property prices are still growing

While Australia’s property market started strongly in 2022, despite concerns about a cash rate increase and the continuing Covid-19 Omicron outbreak, it’s clear that price growth has now slowed across the country.

Interestingly, the shift has seen a divide open up between the suburbs where prices are plateauing and those which are still on the rise, according to the latest PropTrack report.

The trend is particularly prevalent in Sydney.

After all, the city has been hit with an extraordinary boom in prices since the onset of the COVID-19 pandemic, further supported by a drop in borrowing costs.

Thanks to the tree- and sea-change shift where many people relocated to a location or properties with more space and a different atmosphere, clear winners were lifestyle and coastal locations such as the Northern Beaches, Eastern Suburbs and the Central Coast.

After all, the COVID-19 pandemic restrictions significantly changed home ownership goals and what Australians want most in their next home.

But the PropTrack Home Price Index (HPI) shows that over the past year it's been the Bankstown and South-West regions of Sydney that have risen the most - with price growth of over 25% over the past year alone, the report’s author, REA economist Paul Ryan, explains.

These regions have benefited from work-from-home trends pushing people towards larger homes, as well as the reduced need to commute to CBDs, which previously weighed on more peripheral areas.

High property prices across Sydney have also forced many buyers further from the city.

While at a city level the median price of houses is now more than $1.2 million in Sydney, it remains below $1 million in these regions, despite recent price growth. 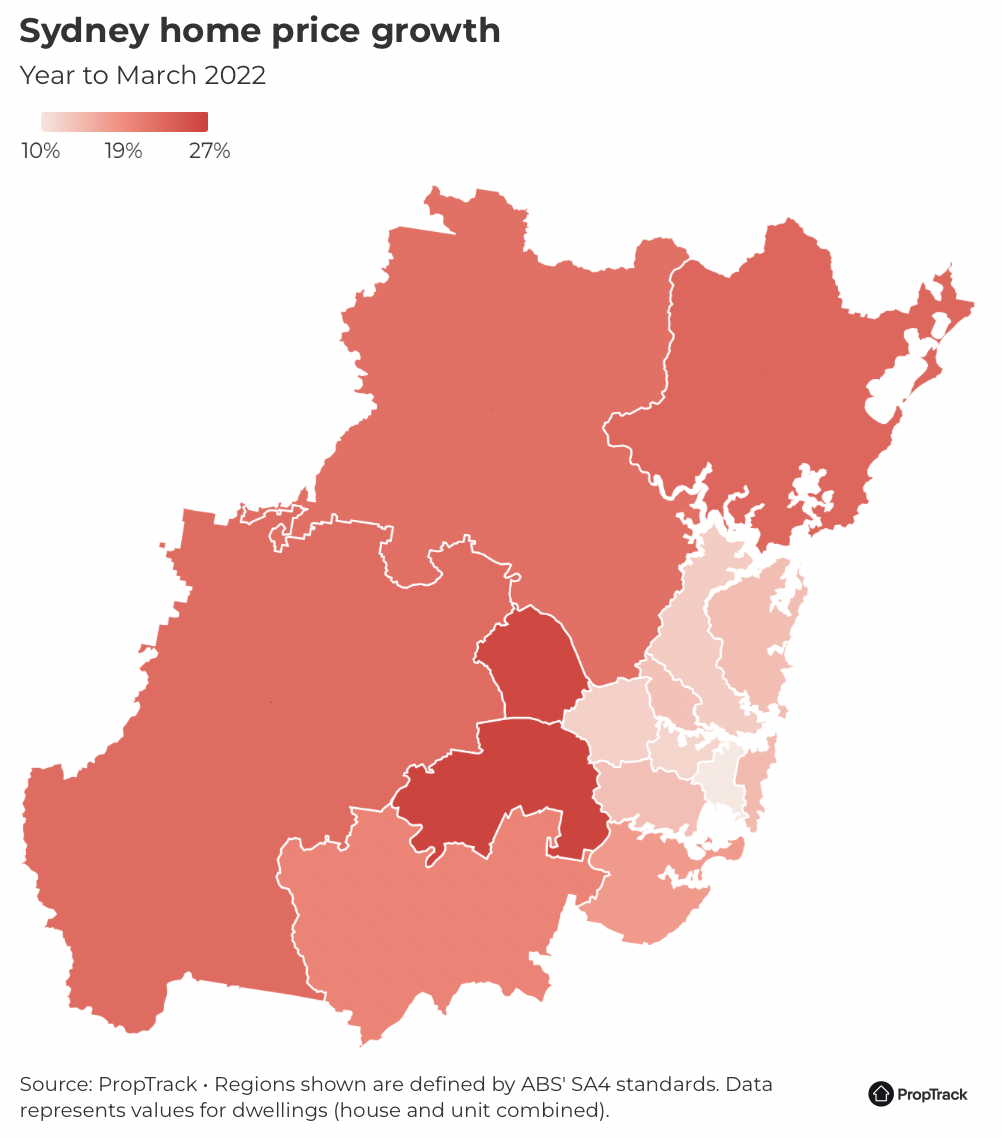 Meanwhile, the Melbourne region has seen a big boom in the Mornington Peninsula since the onset of the pandemic - a boom that continues, with the lifestyle destination seeing almost 20% growth over the past year.

Ryan explains that it's clear many are still taking the opportunity afforded by remote or flexible working arrangements to move to this desirable location.

But the data shows that emerging growth regions are in the North-East and North-West regions of Melbourne, each with 13% to 14% growth over the past year.

Both regions are also priced well below the median across Melbourne as a whole, which currently sits at almost $900,000 million for houses.

Relative affordability is one benefit, along with, again, larger homes, good transport links and amenities. 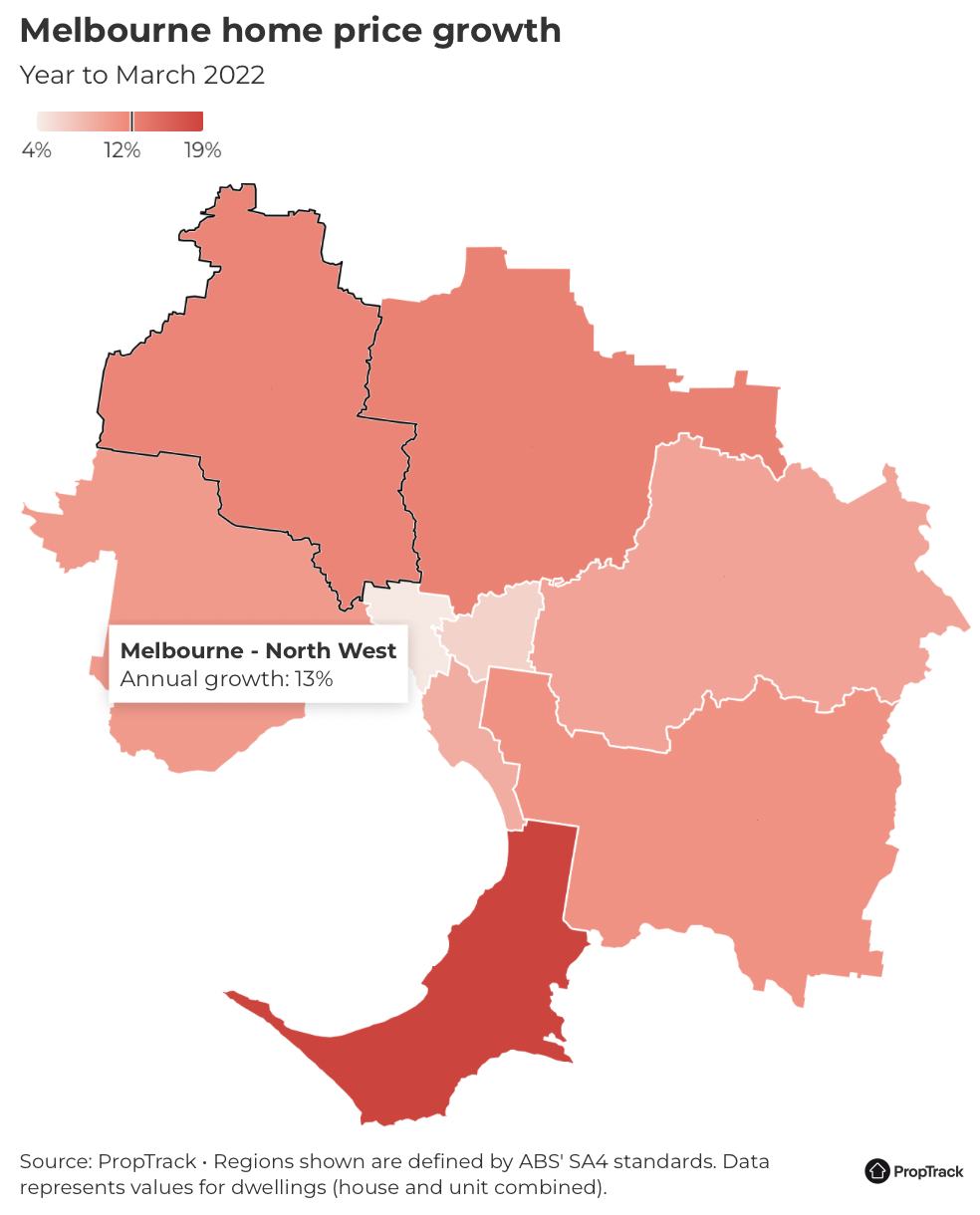 According to the PropTrack report, Brisbane has bucked the slowing price growth trend, with all of the city continuing to boom.

Growth across Brisbane has exceeded 25% over the past year, except in the Inner City region, which still posted a considerable 20% increase.

It's clear that climate, lifestyle, and larger and well-located homes continue to drive strong migration flows north to Brisbane.

Relative affordability is also playing a part, with the citywide median price for houses of just over $600,000 being half of that in Sydney. 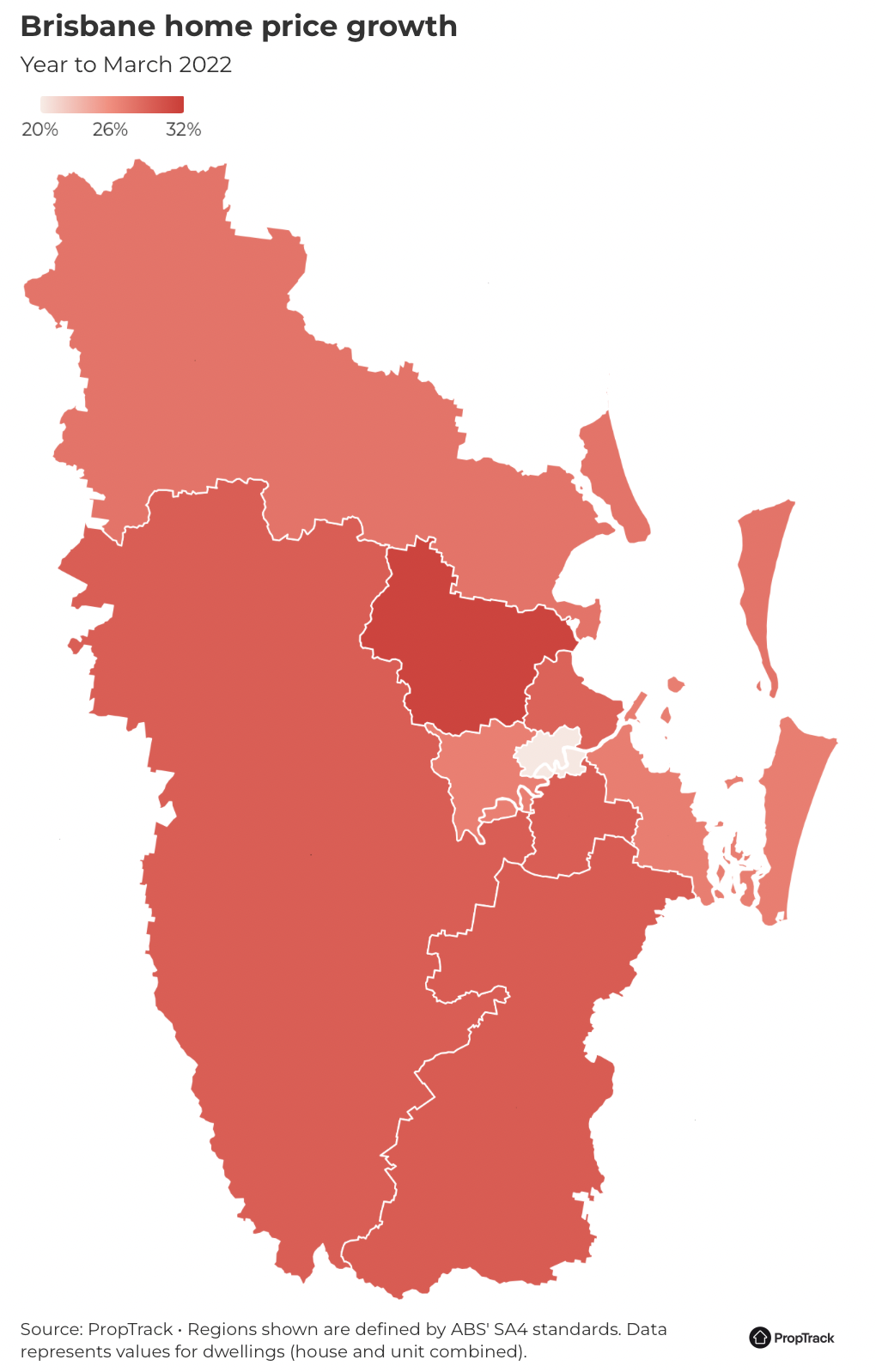 Adelaide was a little slower to boom than the east coast capital cities but once it got going it has remained one of the best performing capital city property markets.

Price growth there has not slowed to the same extent as in other capitals, remaining consistent across Greater Adelaide - with prices up between 23% and 27% in all regions. 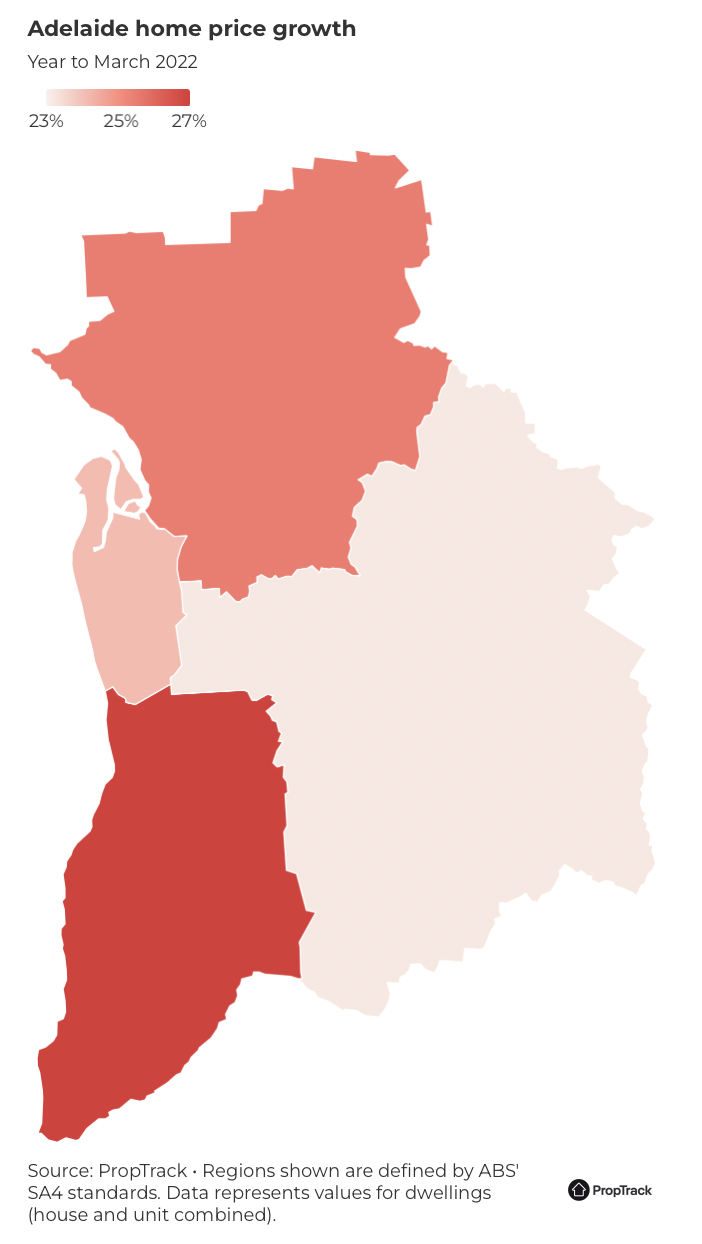 For the first time in 28 years, Perth house prices are the most affordable among all of Australia’s major cities.

With the Perth median house price rising, strong rental conditions, and high rental yields along with improving demographic and economic conditions, it’s likely the Perth housing market will continue its upward trajectory for the rest of the year.

Prices are up on average less than 8% over the year and prices fell slightly in the month of March.

But some regions have done better than others.

The Inner, North East and South West regions of Perth all grew by 9% over the past 12 months.

PropTrack’s HPI shows that much of the weakness in Perth is driven by the North West region of the city in particular.

Brett Warren is a director of Metropole Properties in Brisbane and uses his 18 plus years property investment experience and economics education to advise clients how to build their portfolios.

Are you thinking of putting off the purchase of your new home or your next investment property?

3 Lessons I Learned at Wealth Retreat 2022

These are the most affordable suburbs within 10km of each CBD

Why the ripple effect can only go so far

Most affordable suburbs within 5km of the CBD

10 most expensive streets in Brisbane, revealed

Australia faces housing supply shortage - is another price hike ahead?

Why Cash Flow Positive Property is a CON!

The Two Ingredients Missing for a Decade and Now Driving Brisbane’s Property Market.