Home    strategy   Game Plan: How to take your property portfolio to the next level

Game Plan: How to take your property portfolio to the next level

Your Investment Property reader Rockney Wong wrote in to ask for guidance on how to take his sizeable portfolio to the next level and become a developer in the process. So we enlisted our experts to help design a game plan.

Below, Naomi Beaumont of Positive Real Estate outlines her investment game plan for how Rockney can achieve his goals safely and quickly.

Firstly, congratulations to Rockney. Securing so many investment properties is no easy feat. Rockney should not underestimate the effort he has put in, and his achievements.

Unfortunately, as he has a large amount of debt, he’s almost maxed out his serviceability. Rockney has a few options, but at this moment in time he wants to take steps that won’t put him at financial risk.

He has built an incredible portfolio at the age of only 31, so if he follows our suggestions carefully he could easily be in a position to do whatever he wants as soon as he reaches his early 40s, whether that be developing or something else. The strategy he needs to follow is to achieve capital growth and debt minimisation.

If Rockney wants to be conservative, he may be able to achieve his goals without purchasing another deal. If he keeps his portfolio as is and focuses on paying down debt within 10 years, he won’t need to do anything else.

After he settles on the Hamilton deal, his portfolio will be valued at $2.4m. With a conservative capital growth rate of 5%, it will be valued at $3.6m in 10 years’ time without the purchase of any more properties. But without any debt reduction, Rockney’s portfolio debt will still be at $2m, which will be very difficult to pay off, based on his salary alone.

Debt reduction is integral to Rockney moving forwards. He There are a few ways to do this, including:

I’m interested to know what Rockney’s budget looks like. It’s essential that he reduces his debt, particularly the $30,000 HECS debt, as that is shackling his serviceability.

Rockney must focus on putting away as much as he can from his salary towards debt reduction. If he can get his debt down, it will transform his serviceability. He can easily achieve his goal of $100,000 per annum in passive income in a 10-year timeframe. 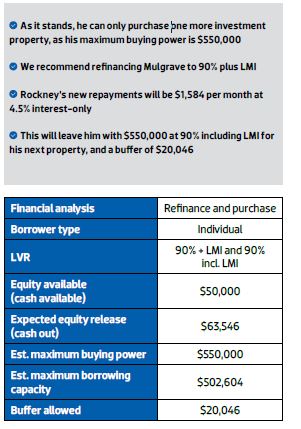 What to do next

Build equity by reducing debt and consider trading within

What I would usually propose is to do some trading (buying and selling a property within 12 to 18 months) to reduce debt faster, but Rockney doesn’t have enough equity. However, this will be an option for him in around two years’ time after his properties have had a chance to grow in value. The more he minimises debt, the faster his cash flow increases. The more property he buys, the more debt, which means more pressure on his cash flow.

When following a capital growth strategy, debt often gets worse before it gets better.

Buy one more property and hold for 10 years

However, Rockney could do one more deal, bringing up his portfolio to seven properties.

If he held these seven properties for 10 years at 5% annual capital growth:

If he held these seven properties for 10 years at 7% annual capital growth:

What if Property #7 only grew by 2% over two years? This would have a drastic effect on the cash flow of the properties. Cash flow will follow capital growth, which is why it’s so important to carefully assess your deals. 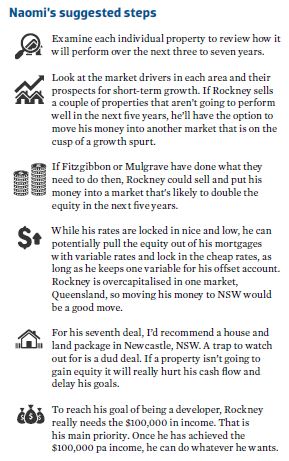 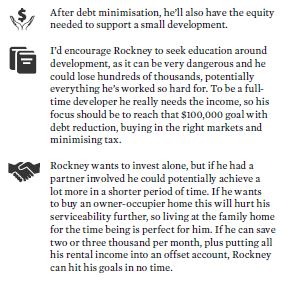 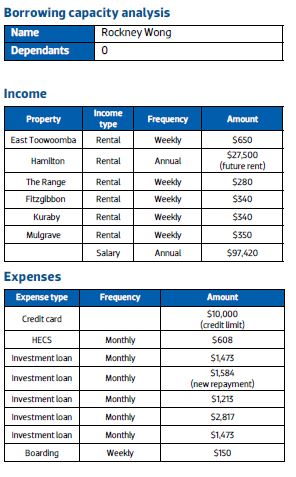 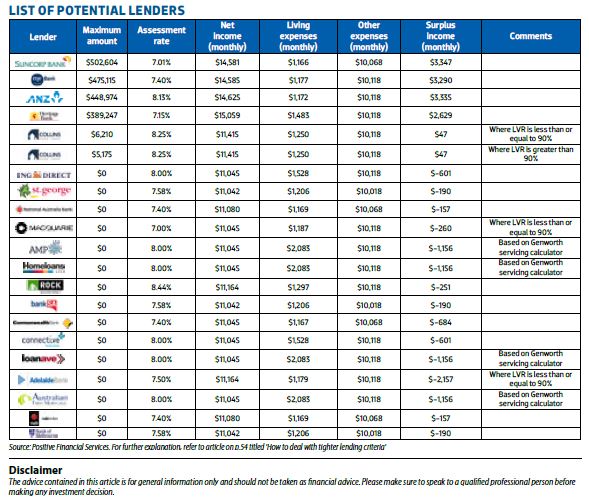